The story of glitsa begins from ancient times. God Pan (god of shepherds) often depicted holding a glitsa at one hand and with the other the sourafli (flute) the famous "Pan flute."

Later, Jesus at “the good shepherd” pictures many times holding a "glitsa" in hand.

At Byzantium and the Ottoman Empire, the glitsa got about the form and reached our times. In recent years the crook took a position as decorative species is a refreshing trend with more performances and embroidery without losing the pastoral incarnation. 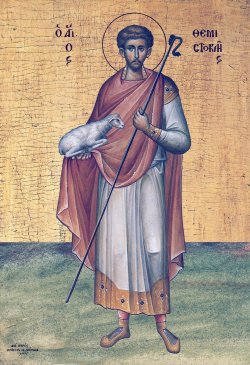 The glitsa has many uses, main use is to guide the shepherds their flocks and also defending themselves from the wild beasts of the mountains.

The walking stick in general and glitsa too, has also historically been known to be used as a defensive or offensive weapon.

Also depending on the circumstances and  facts, used different glitsa. So we have glitsa for weekdays and glitsa with festive embroidery as well. 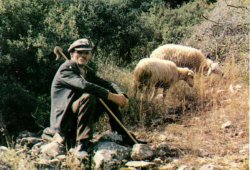 Traditional handles may be designed as a sculpture or decorated by some kind of ornament. In these cases a designer has to make sure that the handle does not loose its major properties – comfort and stability. The walking canes handles designed in the form of a sculpture or decorated by some other means very often, besides their direct use as the support during walking, are considered the art subjects and as such are often the collectors’ items.